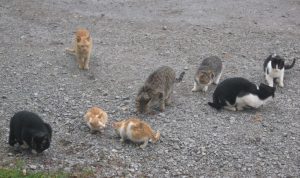 Surgical spay-neuter is the most readily available, permanent and deemed safe sterilization procedure in the U.S. for dogs and cats. Yet, for millions of unwanted animals around the globe – and including some remote areas of the U.S. — spay/neuter surgery is prohibitive due to lack of funding, available clinics and veterinary surgeons. Masses of ever-producing, homeless litters inevitably result in suffering and painful death for mothers, babies and roaming males in many parts of the world.

Injectable calcium chloride as a means of non-surgical sterilization is now a reality. Another drug, FDA-approved Zeuterin, a compound of zinc gluconate, was released in the United States in early 2014 for testicular injection in male dogs. More sterilents and contraceptive options for cats and dogs are being developed and studied for side effects. Among several reports published about calcium chloride is that of Raffaella Leoci, DVM, whose peer-reviewed findings point out the efficacy of calcium chloride for male dogs, in that it permanently reduces testosterone and sperm levels. Findings by Jana and Samanta also indicate great promise for similar effectiveness in male cats.

Like any medical procedure, the benefits and risks of chemical sterilization versus surgical spay-neuter must be weighed by individual pet parents with their veterinarians. However, for large scale implementation, the aim of being able to provide safe chemical sterilization options (in conjunction with rabies vaccines and parasitic treatments) is to prevent countless suffering of animals and improve community health — more quickly and for a fraction of the costs of surgeries in poor, rural and inaccessible regions. Proponents of non-surgical sterilization believe it can offer real hope as being perhaps the best — and in many cases, the only way — to make a major impact in humane population control for large numbers of homeless dogs and cats.

While difficult to estimate, the worldwide populations of dogs and cats are approximately 400 million each, or around 800 million total. As the human population explodes, at least 75% of all these animals are unwanted and homeless — that’s 600 million little souls. Betrayed by human neglect or abandonment, unaltered cats and dogs follow the rapid cycle of reproducing generations of offspring who are feral – or distrusting of humans. Most cling to life in parts of the world where there are no animal protection laws or little enforcement. They live short, hard existences in the shadows as they are despised, beaten or killed while desperately scrounging for food. In America, a growing number of communities have been employing successful Trap-Neuter-Return programs that include vaccines for feral cats. Compassionate people look after these otherwise healthy colonies and over time, the populations naturally shrink. Still, with millions of feral cats, in locations where it is challenging to provide spay-neuter surgeries, they can become victims of extreme cruelty, misinformation and stereotyping by some people — even the police. 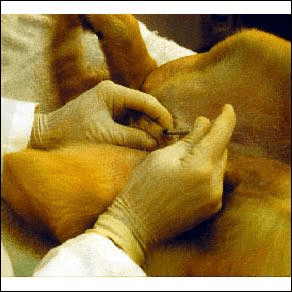 Sterilization is more than a procedure to prevent rapid overpopulation. Properly administered, it can be an essential tool to advance animal welfare and save lives for millions of cats and dogs, and also protect human health. For example, thousands of people in poor countries die of rabies. Over 95% of such cases are reportedly linked to bites from street dogs who become targeted in vicious killing campaigns, so preventing the births of more feral dogs is critical, alongside delivering rabies and other disease-preventive vaccinations to animals who undergo sterilization.

Check this blog often as we share more information on developing veterinary techniques that can humanely prevent litters, including those options for when spay-neuter surgeries are not accessible.