Kitten Season: The Joy and The Heartbreak 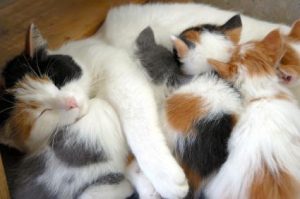 What is more precious than a family of tiny kittens, piling up on their mom for love and nourishment? Cats are among the most dedicated and loving mothers in the animal world. Some of us would even argue they are better parents than many humans are to their offspring!

This is the time of year that spay/neuter groups, rescues and shelters call “kitten season” because of the high influx of babies that come into the world. It is also a great time of worry for these caregivers and organizations. Why? Because of the heartbreak that so many kittens will become homeless or feral, subject to abuse and suffering on the streets, or end up being euthanized in shelters – simply because their numbers outweigh available, loving human adopters. The leading cause of death of dogs and cats in the United States is euthanasia, with the lives of 5 healthy animals terminated every 60 seconds. That’s about 3 million animals a year. And 70% of cats who enter shelters will not leave there alive.

But here’s a simple “fix.” Spay/neuter is a humane – and the ONLY — solution to managing high birth rates. Understanding basic biology is important to help align feline births to human adopters, so that every kitten and cat has the chance for a happy, loving home.

Cats have an early and fairly fast reproduction cycle. The overwhelming majority of litters born in homes are “accidental.”  Immature kittens as young as 5 months 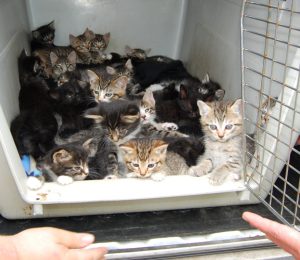 can become pregnant. So can dogs, although their cycle is slower. For example, the feline “heat” cycle can start in late fall or winter and into the summer. In warmer climates, the cycle is year-round, with one pair of unspayed/unneutered cats producing as many as 3 litters a year, or up to 20 kittens. And each of those offspring of unaltered kittens, in turn, will do the same. Factory breeders in cruel puppy mills (there are kitten mills, too) and similar operations of captive wild cats, exploit taking babies from their mothers before being fully weaned, to escalate the breeding cycle. Nevertheless, even domestic mama cats living with humans can get pregnant before their current litter is weaned.

Prevention: The Best Practice to end homelessness, cruelty and euthanasia! 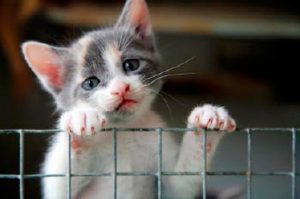 It is estimated that if just 35% of cat guardians would spay/neuter before maturity, feline birth rates would fall enough to ensure that every cat has a real chance at a loving home!

Esther Mechler, President of Marian’s Dream and United Spay Alliance, has two words for kitten season: Prevent it!  She says, “In two counties in rural, poverty-plagued northern Maine, shelters and rescue groups are not seeing the influx of kittens because of proactive measures taken by SPAY MAINE in funding partnership with the Sewall Foundation, the Maine Community Foundation and Marian’s Dream, for the Fix Felines By Five Months campaign. When the numbers of litters is greatly reduced, the few kittens that do arrive can be placed in good homes, not just given out to anyone who will take them.” 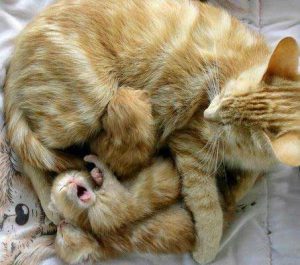 Outside Fix By Five, Susan Hall of Spay Maine adds, “We try to give people who call us with pregnant cats or cats in heat options so they do not have to wait for vouchers, because a wait equals a litter. In Maine, there are ways to get strays and ferals spayed and neutered for low or no cost.  There is a grant through The Cleo Fund for western Maine, The Cleo Fund for other parts of the state, and there is also the Help Fix Me program (but those vouchers take a longer while to get). The Community Spay Neuter Clinic often has grants for ferals.

All 29 member programs of the United Spay Alliance coalition have similar opportunities for low to no cost spay/neuter in their states. Shelter intakes have dropped in many communities. The births of millions of unwanted cats and dogs have been prevented, and euthanasia rates are slowly but steadily dropping, some faster in those communities with greater reach, veterinarians and vouchers. Sadly, in states and regions where little to no programs exist, the kill rate remains shockingly high.

The connection between high pet birth rates and cruelty is clear. Tragically, we hear too often of kittens and puppies being thrown in garbage bins, taped in boxes, or dumped on the side of the road. The more plentiful kittens and puppies are around, the greater the chance for abusers and unstable people to get their hands on these innocents for horrendous crimes. (Always report animal cruelty and abandonment. The FBI now tracks reports of animal abuse, which is a crime.)

What to Do if You Find Kittens

Sometimes, we can encounter kittens in a field or even under a porch. What do you do if you find kittens outdoors? 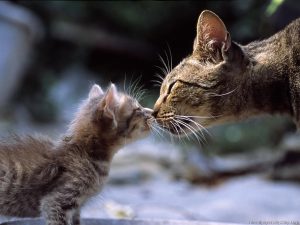 First, is the mother around? She may be away for a few hours finding food. The family could be neighborhood pets, strays, semi-feral or feral. You cannot tell just by looking at a cat if she or he is a stray, feral or not (unless he has been neutered and released, when you will often see the left ear is tipped.)

Should you take them in or leave them outside with mama?  Your first reaction may be to bring them in your home. However, that may not be what’s best for the kittens, or even you! If the kittens are offspring of a feral cat, socializing and caring for them to help them become adoptable takes time, patience, and lots of attention, but it happens often and can be very rewarding. Some kittens may need additional help in freezing weather, or if they are not doing well. But keep in mind you must be absolutely certain the mother is not coming back — because 50% of kittens die if taken from their mother while they are still nursing.  So it may be safer to be with their mother and the kittens socialized after they are safely live-trapped, unless you can arrange to care for the whole family. 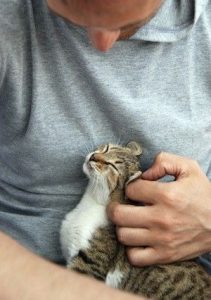 If you are not well experienced in fostering, call your state or local Spay Neuter organization, feline rescue or feral groups who value cats and will not harm them. National organizations, like Alley Cat Allies or ASPCA can also provide information. Many will live-trap the family, spay the mother, and eventually the babies, and provide vaccinations. They may decide if the cats are really feral, if it is best to release them into a colony, or socialize them for potential adoption.

Some people fear calling anyone because they don’t want the family hurt or euthanized. But doing nothing will not help and increases the likelihood of eventual suffering and death. The good news is that within and outside the USpA network – there are many groups and individual fosters who love cats, have the skills to nurse babies without mothers, and to re-home them. You can also learn to become a foster by contacting your local cat rescue or shelter!

“It is easier to socialize kittens when they are young, so make sure to touch and spend time with stray kittens each day to prevent them from becoming feral, “ says Shelby Parsons, Communications Manager of Mississippi Spay and Neuter. ”Get them fixed before they are 5 months old. You’ll prevent future litters, and altered cats have a better chance of being rehomed.”

The Joy of Being Wanted in a Loving Home 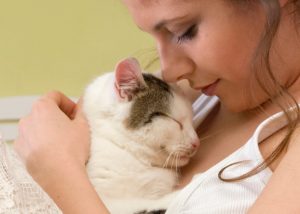 Some people are afraid that spay/neuter will eliminate kittens and puppies forever. This fear is unfounded. We will always have a need for animal shelters, just as we have a need for human orphanages and nursing homes. However, we must end the massive extermination and suffering of living, healthy cats, kittens, dogs and puppies in our nation’s shelters. Adoption alone cannot bring about a No-Kill nation when the reproduction spigot is turned on full blast and not slowed, so to speak. Spay/neuter must be part of the equation for adoption and shelter reform.

As Esther Mechler emphasizes, “If we are to see the end of the huge waves of litters that arrive at the end of spring and the beginning of fall we need to be very proactive, to jump on the Fix Felines By Five bandwagon and spread the word.  Two IPSOS studies in 2009 and 2011 showed that 3 out of 4 people surveyed either did not know when young cats went into first heat (4 to 5 months) or they thought they needed to be spayed at 6 months or later.  Of course, by then they already had that first litter – with the need for several good homes. It’s not rocket science: with education and help for those in need, we have the power to stop kitten season – or at least to slow it down to a point at which every kitten is a wanted kitten!”