Historically, cat owners have not known when cats should be spayed/neutered.
In addition, veterinarians were not in agreement as to when to recommend spay/neuter to their clients and many of them refused to spay/neuter before six months – or until after first heat. The result was a huge annual surplus of feline litters. 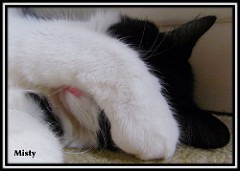 At Feline Fix by Five, we aim to change that!

Nearly 75% of people surveyed in an IPSOS marketing project (which was commissioned by PetSmart Charities in 2009 and 2011) either did not know when to spay or neuter, or thought that 6 months or later is when a pet should be spayed/neutered.

Timing is everything and the time is NOW!

Research has shown that spaying before five months can have a dramatic impact on cat overpopulation by preventing young cats from coming into heat and producing unwanted litters. We need to lower the number of litters to be in proportion to the prospective homes.

Spaying and neutering before puberty also helps with pet retention because it is the hormones that drive some of the unacceptable behaviors such as howling and spraying, aggression and wandering off – or getting pregnant.  Spaying prior to first heat virtually eliminates the incidence of mammary gland cancer in cats and prevents enormous suffering.

Do you have a new kitten in your household?

Find out how your cat can be a Feline Fix by Five Cat!