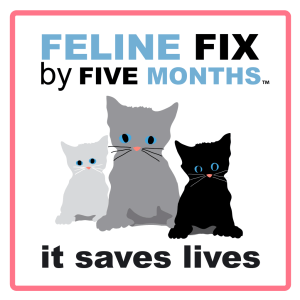 The campaign promotes moving the recommended age to spay or neuter cats from six months back to five months before cats go into heat.  The earlier age could eliminate the large surplus of cats of which more than 1.5 million are euthanized annually for lack of homes. It would also greatly reduce risk of mammary gland cancer for female cats and spraying and marking in male cats, which costs many young male cats their homes.  All the major, national veterinary organizations have endorsed the campaign.

Esther Mechler, founder of the Fix by Five Campaign, said, “It is amazing what a huge impact a small change can make.  By moving the recommended age back just four weeks, millions of lives can be improved.”

Dr. Philip Bushby, DVM, added,  “As a profession, we need to recognize that there is, at present, no scientifically sound basis for waiting until 6 months of age or older to sterilize cats and no contraindications for spay/neuter at 4 to 5 months of age. There are numerous known health benefits for spay/neuter in cats, in addition to the population management benefits, and there is no evidence to suggest that pediatric gonadectomy by 5 months of age is linked to any increased risk of disease.”

A survey conducted in 2000 of veterinarians who were, at that time, spaying and neutering cats under 5 months of age, confirmed that the surgeries were easier, faster, and had fewer complications than spay/neuter of cats at 6 months of age or older.”

For more information about the campaign, visit www.FixByFive.org