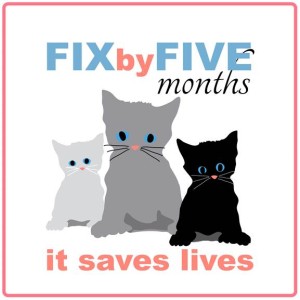 United Spay Alliance is proud to endorse the groundbreaking Feline Fix by Five campaign, an initiative of Marian’s Dream.

The goal is simple: to spread the word that cats can and should be spayed/neutered by five months of age, or even earlier. Timely spay/neuter is essential to avoiding unintended, and often unwanted, litters. According to the 2016 statement of the Veterinary Task Force on Feline Sterilization,

Given the known benefits of sterilization and the lack of evidence for harm related to age at which the procedure is performed, the Veterinary Task Force on Feline Sterilization calls for veterinary practitioners and professional associations to recommend sterilization of cats by five months of age.

Historically, veterinary students had been taught that six months was the appropriate age to spay or neuter companion animals. That mindset has changed over the last few decades, with many veterinarians spaying earlier. Still, the Veterinary Task Force concluded that current recommendations for the age to spay/neuter cats are arbitrary and inconsistent. Settling on clear guidelines can limit confusion among cat owners, reduce the risk of unwanted litters, and maximize health and welfare benefits.

The key is to “beat the heat”—that is, to ensure that cats are spayed before their first heat, or estrus. Far too many kittens (and pups) are born to mothers who would be spayed after the first litter was born. And far too many unwanted cats end up as strays or in shelters. We can put an end to this with timely spay/neuter.

Visit the Feline Fix by Five website to learn more and to see the list of major organizations that have endorsed fixing by five months and to find resources for cat owners and resources for veterinarians.