A turning point for cats?

Where the Feline Fix by Five program started, and why it matters.

United Spay Alliance is proud to join Marian’s Dream in promoting the Feline Fix by Five program. Here is a look back at where it all started, and why this issue remains so critically important today.

The past two years may prove to be a real turning point in cat welfare. Why? Because at the start of 2016 a veterinary task force was formed with the goal of improving cat welfare, and by the middle of 2017 all of the major national veterinary organizations had endorsed the statement the task force created.

But why did we start this campaign? Why is it so important? 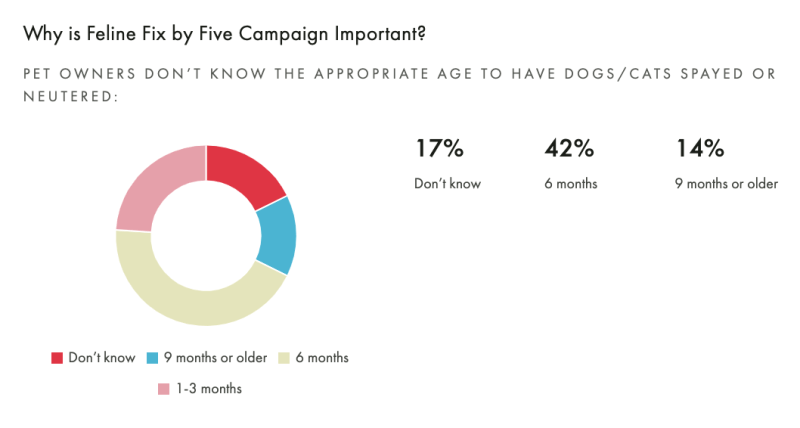 This chart is taken from page 27 of the IPSOS Marketing studies commissioned in 2009 and 2011 by Petsmart Charities, and entitled: Per Owners Don’t Know the Appropriate Age to Have Dogs/Cats Spayed or Neutered.

Indeed, there is confusion among owners as to the appropriate age to have dogs/cats spayed or neutered, with 17% indicating “Do Not Know”.

Nearly as alarming are the 42% who indicate 6 months as the ideal age (by which time cats can have already had a litter and be ready for the next) and worse yet, an additional 14% who say 9 months or older.

This chart clearly indicates that seventy-five percent of adults (in a sample of 3000) either did not know when to spay/neuter, or thought that 6 months or later was fine.

This widespread confusion regarding when to spay or neuter cats led us, at Marian’s Dream, to ask if there might not be consensus among the veterinarians who studied the issue. There are many, many reasons not to wait till first heat including the greatly increased risk of mammary gland cancer, development of unwelcome, hormone-related behaviors, risk of accidental litters, and of course risk of unwanted, unplanned litters.

On January 15, 2016 a group of prominent veterinarians met at the North American Veterinary Conference in Orlando Florida. This group included researchers, professors and practitioners with a wide range of experience. The group was invited by Joan Miller, Chair of Outreach and Education at the Cat Fanciers’ Association, and was sponsored by Marian’s Dream. This Task Force created a consensus document about best practices regarding spaying cats.  A summary of the document is as follows:

We welcome people to take part in this campaign in their hometowns, at shelters, rescue groups and everywhere. By 2022 we hope that 75% of people will know the best time to Fix their Felines is between eight and twenty weeks!